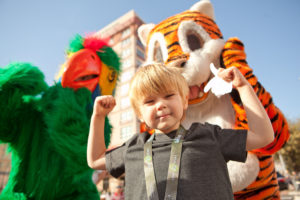 It is SXSW time in Austin.  While the Austin music scenes adds vibrancy to our city, we often think of adults partaking in various events.  It is a good time to pause and reflect on the benefits of music for young children.  While certainly enjoyable, music’s impact on the brain is well-documented. This week, I wanted to share this post from one of my favorite bloggers regarding child development.  This post is written by Amanda Morgan of notjustcute.com.  There is some fantastic information in there.  Perhaps it will prompt you to find seek out some of the children’s events over the coming weeks, and enjoy boosting your child’s brain power, while making the most of our great city!

Henry Wadsworth Longfellow wrote, “Music is the universal language of mankind.”  It is a transcendent medium, one that takes on a variety of forms to meet the intrinsic needs of each person.  It is enlivening and motivating.  This we can all agree on.  What has been debated in recent decades is the relationship of music to learning.  Early studies presented the concept of the “Mozart Effect”, claiming that simply listening to Mozart made people (particularly applied to children) smarter.  The study had shown enhanced performance on certain measures after a period of listening to Mozart.  What followed was a firestorm of (good-intentioned as well as money-motivated) promoters of the idea that listening to music would make children smarter.  Many began to believe that simply playing great musical works in the presence of infants and young children would boost their IQs and give them the fighting edge in the race to becoming the uber-brilliant brain child apparently desired the world over.

To the dismay of purveyors of music as a magical brain supplement, more recent studies have shown that the connection between listening to music and test results may be more likely the result of a favorable, perhaps relaxing, environment, not of a permanent increase in brain capacity.  Likewise, studies showing the connection between children who take music lessons and high academic scores, have been challenged by further research claiming this connection has more to do with other factors that allow the child to participate in those lessons (parent involvement, socio-economic factors, etc.).

To many interested only in “bottom line academics”, the more tenuous the connection between academic performance and music becomes, the less value is placed on the inclusion of music in an education setting.  Music begins to be seen as a distraction from education, rather than a pleasurable contributor to it.  How unfortunate!  While it is becoming more and more clear that music does not contain a silver bullet formula, automatically transforming all in its presence into elite academicians, its value in the lives and education of all people, and particularly young children, is no less validated.  Here are a few reasons we, as parents and teachers, should still fight to include music, and its nearly inseparable counterpart, movement, in the lives of our children.

Music is Part of the Human Experience.  If you want create a super-computer, focus only on input and information.  If, however, you would like to contribute to the development of a human being that can think, feel, and create, provide and discuss experiences filled with beauty and wonder.  Give them opportunities to express opinions, emotions, and imaginative thoughts conjured up by music.  Let them absorb a variety of sounds and musical genres and give them the opportunity to respond in their own ways, whether by dancing, drawing, talking, or just being and feeling!

Music Enhances and Enlivens.  As humans, music effects us.  The next time your favorite song comes on the radio while you’re driving, look down at your speedometer and notice whether you have changed your speed.  I think the best excuse I’ve ever heard of for getting out of a speeding ticket was “the music made me do it.”  When the officer further queried as to exactly what music had created such excitement, the answer was, “The Mormon Tabernacle Choir”.  Perhaps it was the novelty, or just a shared affinity, but it worked!  You can be aware of this influence on children as well.  The mood of their environment and the tempo of their own movement can be ramped up or slowed down by the music that plays around them.  More than once, I have responded to an overly rowdy group of children by simply changing the music that played in the background to a slower tempo.  Music from the baroque period is great background music, not only for its beauty and complexity, but because it often carries a tempo that matches the human heartbeat.

Music helps children to focus and gets them ready to listen.  One way to do this is to come up to where they are, and bring them down to you.  This means you begin with music and/or movement that is fast-paced and active, and gradually bring it down to a calmer, slower level.  The song, “Candy Man, Salty Dog” by Sharon, Lois, and Bram(available on iTunes), is an excellent example of this.  By coming up to their level, or even bringing them up a level, you work out pent-up energy and match their feelings and movements to the music.  Once the children are tied in this way, it is easy to bring the music down and have them follow.

Music is an Attention-Getter.  There was a reason the Pied Piper was able to lure the children of Hamlin away with music.  Children seem to be hard-wired to seek out musical experiences.  In fact, it has been shown that infants actually prefer and attend to their mothers’ singing voices over the same mothers’ speaking voices.  Children are easily drawn into musical activities, particularly if they are active participants.  If you are trying to get the attention of a group of children, try singing instead of speaking, or involve them in a rhythm game where they watch and follow your beats and patterns.

Music is often used for transitions in a classroom setting because the children quickly respond to the message and mood of the music.  Is there a preschool classroom in America that does clean up time without a song?  (By the way, if you’re tired of the standard Barney version, Laurie Berkner has a fantastically refreshing one, aptly named “Clean it Up”, available on iTunes.)  Music can be used to begin the day or gather children for group time.  It signals to them where they should be and what they should be doing.  And more than that, it’s inviting so they want to be there, and they want to be doing it.

Music is a Tool for Teaching.  Because children WILL listen, and because they are actively involved, they are more likely to learn what is being taught through music.  Musical elements and the multi-modal nature of music participation also aid in memory and recall.  New vocabulary and facts, even phone numbers and days of the week, when set to music, are more easily remembered than those simply memorized by rote.  Just try teaching the letter names to a child without singing the time-tested ABC song!

Music is a form of deep, personal expression.  Music also readily lends itself to promoting listening skills, discussion, and learning new vocabulary, all of which are literacy goals for preschoolers.  In fact, both the National Association for the Education of Young Children (NAEYC) and the International Reading Association (IRA) recommend the inclusion of music as a way to build prereading skills, particularly phonemic awareness skills.  Songs and fingerplays reinforce language elements, such as rhyme, alliteration, fluency, and rhythm/syllables.   The mere act of listening to music and detecting the changes and differences in sounds builds auditory discernment, an important element in active listening, phonemic awareness, reading, and language.

Music Builds Creativity.  While creativity is rarely, if ever, measured by the standard exams given in our schools today, it is one aspect that separates good students from brilliant minds.  Children who are given opportunities to develop creativity can apply learned facts in more valuable ways than simply filling in bubbles on test sheet.  These students synthesize and apply information in meaningful, literally creative ways, turning the information into “product”.  All the while, the creative process infuses an element of passion into the creator’s work  that makes the work motivating, and even fun!  It has been said that Thomas Edison, while prolific in his accomplishments, never really worked a day in his last 50 years, because the creative process is not viewed by the creator as “work”.  Children who have the flexibility of thinking that allows them to see problems in new ways and find solutions in new sources will be the “Edisons” of tomorrow!

Music is not the subliminal brain suplement that many had hoped for, but it is a beautiful and enriching part of the human experience.  Our children will not become nobel laureats simply because we bathed them in the sounds of Bach, but through a variety of musical experiences, their lives and their learning will be greatly enhanced.

The Cognitive and Academic Benefits of Music to Children: Fact and Fiction Authors: Rudi Crncec, Sarah J. Wilson, & Margot Prior