You are here: Home / FUMP Directors Blog / The best parenting advice I received 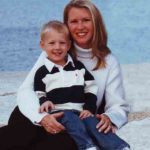 In this column, I like to share with parents some of my perspectives on parenting and the preschool years. Next week, I will begin my 26th year in child care. I began here at FUMP as a substitute while attending UT, and returned to FUMP in 2002. When thinking about what to write as this anniversary draws near, I wondered what was the best parenting advice that I ever received? What was memorable, quick, and has applied even into my son’s middle school years? It didn’t come from my child development professors, national conference speakers, or from the hundreds of hours of continuing education that I have received. Rather, it came from my mother-in-law.
I was all tied up in knots when my three year old son, David, was misbehaving at school. He was best friends with a boy named Andrew, who was pretty rough and tumble. David LOVED playing with him and overlooked the pushing or shoving to keep the friendship going. After being on the receiving end, David started roughhousing with other friends. Once the teacher reported what was going on, I was in overdrive—Andrew was a bad influence on my son AND what would his teachers and other parents think of me. I was incredibly worked up over it and going on endlessly to him about it when I picked him up from his class, at bath time, at bed time, coaching him through his options, reading books about it, talking to his teachers, my girlfriends, the list went on and on.
I turned to my mother-in-law who raised five children and she simply smiled and said that David would be just fine — that the person he is at three is not who he will be at 13 or even 33. He will try on all kinds of behaviors, some good, some bad during his childhood. Just because he was acting aggressive for a short spell did not mean that I had an oppositional child, who would forever be pounding on his peers at recess. I realized that I was acting as if I had discovered a lifelong character flaw and had to stamp it out immediately. She advised me to just encourage him to play nicely when I dropped him off and let him (and his teachers) take care of it.
She also gently reminded me that I can’t fix it for him. He has to go through the stage for himself and learn his own lessons. Both positive and negative experiences will shape him into the person he will become. It wasn’t my job to right all of his wrongs, or create a utopia where everything was smooth and trouble free every moment. Learning from mistakes is an incredibly important life skill, and giving him the chance to do that was what he really needed. Of course she was right. The phase passed and he moved on to some new behavior that I worried about next.
So a word to you from someone who has been there before…Remember that this too shall pass. Excessive worry or micro-managing your child’s behavior isn’t necessarily in their best interest. Let them learn their lessons, experience consequences and come out on the other side. Your job is about being there to support them when they need it. I hope you find this advice helpful as well.
A postscript…we ran into Andrew last summer at the pool. I remembered his face like it was yesterday. He was a perfectly pleasant, polite, well-adjusted young man of 13. I guess he was probably going through a stage too.